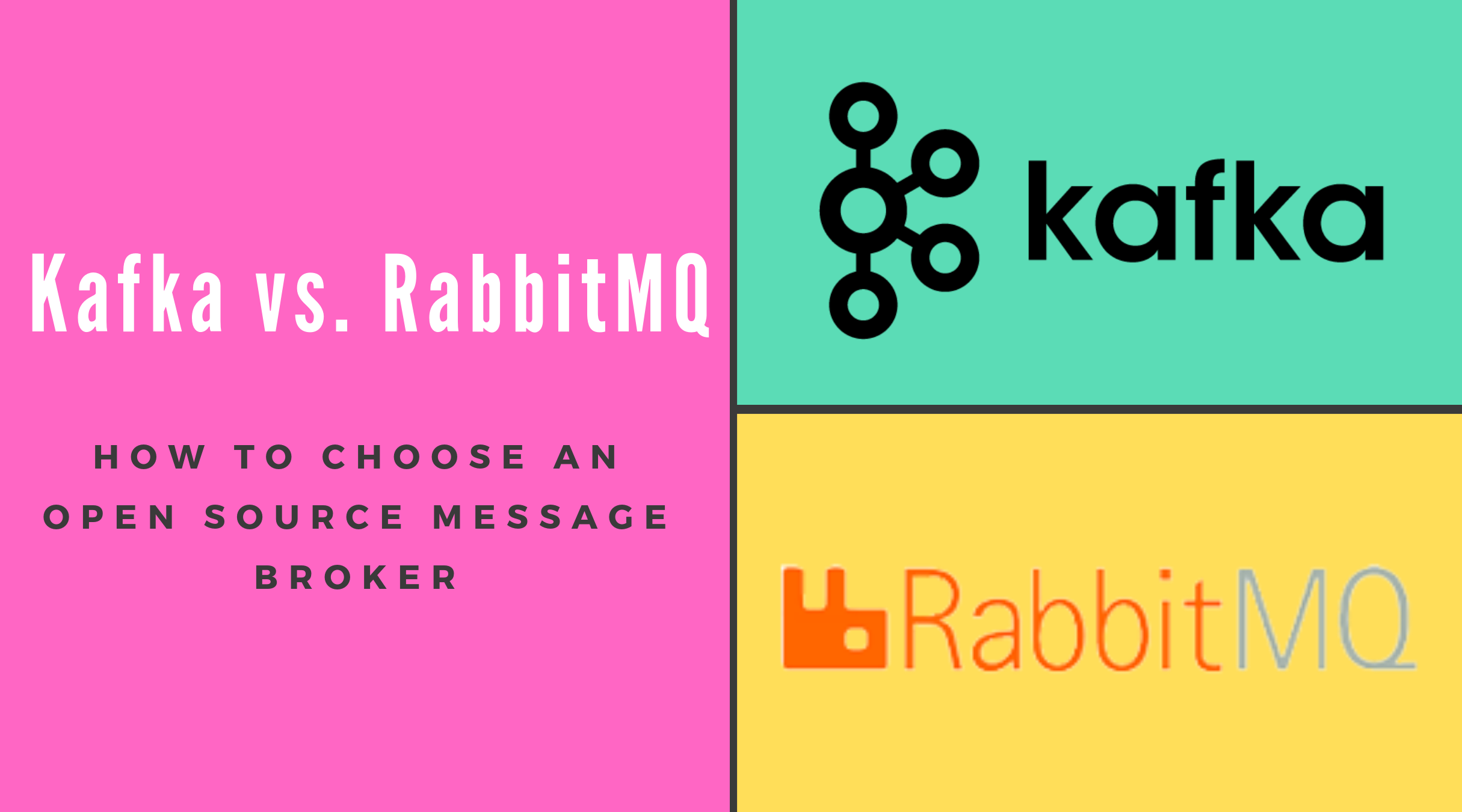 There are several message queue programs to choose from:  Kafka, RabbitMQ, ActiveMQ, ZeroMQ, Redis, Pulsar among others. In this post we discuss the primary factors to consider when choosing a message broker, and we will focus on two of the most popular choices: Kafka and RabbitMQ. 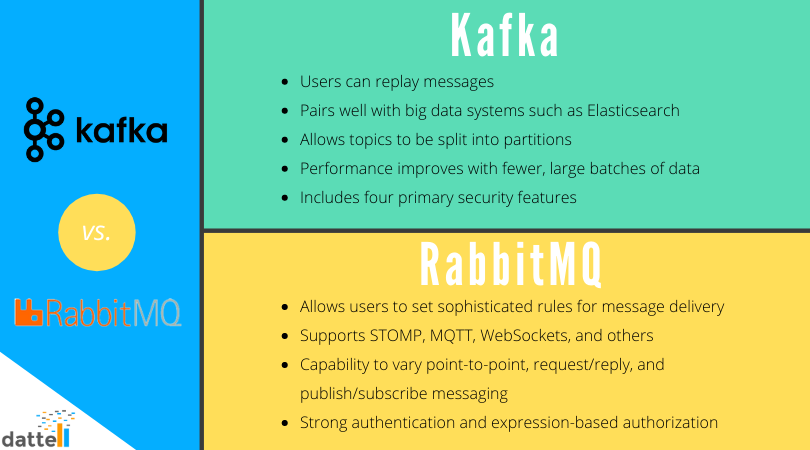 Structure Basics for Kafka and RabbitMQ

Both Kafka and RabbitMQ bridge two traditional messaging technologies:  shared message queue and publish-subscribe. In brief, in the shared message queue model individual messages are sent to the queue by a producer and read only once by a single consumer.  In the publish-subscribe model (also referred to as pub/sub), the senders (publishers) and receivers (subscribers) of messages are decoupled. Subscribers receive messages only from the topics to which they are explicitly subscribed.  Check out this post for a detailed background on these two traditional messaging models and how Kafka works.

The term topic is used for publish-subscribe implementations, referring to consumers subscribing to messages published to particular topics.  There are two types of subscriptions, ephemeral and durable. Both types can be employed when using Kafka or RabbitMQ; however the specific terms ephemeral and durable are more often used when discussing RabbitMQ rather than Kafka:

A. Ephemeral subscription:  Subscriptions to topics that are active only within the limit that the consumer is active/running. When the consumer stops running, then the subscription and any unprocessed messages are lost.

B. Durable subscription:  Subscriptions to topics are maintained until they are specifically deleted.  The subscription is maintained even if a consumer shuts down.  When the consumer is running again, the message processing is resumed.

Kafka is ideal for handling large amounts of homogeneous messages, such as logs or metric, and it is the right choice for instances with high throughput.

Replay Messages. One of the key highlights of Kafka is that it allows the user to replay messages. This is especially important for analytical use cases. For instance, if you are tracking device data for internet of things (IoT) sensors and discover an issue with your database not storing all data, then you can replay data to replace the missing information in the database.

Big Data Consideration.  Kafka also pairs well with big data systems such a Elasticsearch and Hadoop.  We serve clients across industries and with a range of throughputs that are best suited to a Kafka message broker and high capacity backend. The two programs work well together for scalable data collection and storage.  Click here for more information on Kafka support services.

Scaling Capability.  Kafka allows topics to be split into partitions. This feature is important because it allows multiple consumers to handle a portion of the stream and makes horizontal scaling possible.

Batches.  Kafka works best when messages are batched. In other words, its performance improves with fewer, larger batches of data, rather than receiving lots of small messages. We recommend the smallest batch be 100 bytes, but preferably 1-10 kilobytes in size. Larger batch sizes come with a small latency increase depending on your implementation, typically a few milliseconds.

Security.  Earlier versions of Kafka did not include built-in security features, but that changed with Apache Kafka 0.9. Version 0.9 includes four primary security features. 1) Administrators have the ability to require client authentication through either Transport Layer Security (TLS) or Kerberos. 2) Administrators can use a Unix-like permissions system to control user access to data. 3) Messages can be securely sent across networks with encryption. 4) Administrators can now require authentication for communication between Kafka brokers and ZooKeeper.

Mature Platform. Kafka has a large and active community with countless articles and resources available on websites like this one.  There are also dozens of plugins available for distributions & packaging, stream processing, Hadoop integration, database integration, search & query, management consoles, AWS integration, logging, metrics, and more.

Kafka doesn’t come prepacked with a friendly graphical user interface. However, it is possible to create one using Kibana. See our post on monitoring Kafka for examples of what Kafka monitoring looks like with Kibana.

Compared to Kafka, RabbitMQ can be a good choice for instances with lower throughput. RabbitMQ is slower than Kafka but provides an optimal REST API as well as an approachable graphic user interface (GUI) for monitoring queues.

Discrete Messaging.  RabbitMQ allows users to set sophisticated rules for message delivery. Options include security and conditional routing, among others.

Multiprotocol Support.  RabbitMQ was originally built as an AMQP broker, and it also supports STOMP, MQTT, WebSockets, and others.

Security.  RabbitMQ has a history of strong authentication and expression-based authorization.

Mature platform. RabbitMQ has a large community and there are countless articles and resources.  It is available for Java, client libraries, .NET, Ruby, node.js, and has dozens of associated plugins.

RabbitMQ is slower than Kafka so for high throughput use cases it will likely not be the best fit.

Redis is another message broker option

. Being in-memory only, Redis is faster than even Kafka. It works best for customers whose destination can receive data far faster than the data can be generated.

When to Use RabbitMQ vs Kafka

To summarize, if you’re looking for a message broker to handle high throughput and provide access to stream history, Kafka is the likely the better choice. If you have complex routing needs and want a built-in GUI to monitor the broker, then RabbitMQ might be best for your application.

Dattell’s engineers specialize in data architecture, including the design, implementation, and support of messages brokers. Reach out to us with any unanswered questions or unique use cases.

We offer a number of support services including RSA, workshops, and training.